There was a time when thousands of Great Green Macaws soared freely in the sky above Costa Rica. Now, there are only about 300 wild ones left in the small Central American country.

Deforestation–particularly the commercial logging of the mountain almond tree, which Great Green Macaws rely on for food and nesting–as well as rampant poaching, have virtually wiped out a once flourishing species.

Mark Hagen’s Photojournal: The Majestic Birds of Costa Rica can be found here. 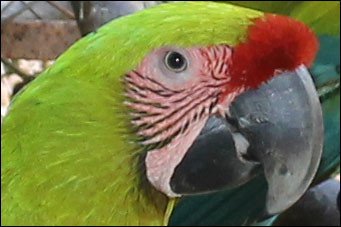 Bird Sanctuary in the Hills

In Alajuela, 20 kilometres northwest of San José, Mark visited a bird sanctuary called the ARA Project, which is doing heroic work to save the endangered birds.

Nestled in the Alajuela hills of Río Segundo, the centre breeds and raises Great Green Macaws, as well as Scarlet Macaws (another vulnerable and endangered species), and later releases them into the wild.

The sanctuary was founded in the 1980s by Margot and Richard Frisius, US expatriates who purchased land and established a zoological park dedicated to caring for abandoned or confiscated parrots.

Before they passed away, the founders transferred control of the centre to a trust called the ARA Project, a nonprofit organization dedicated to macaw conservation. It established a Scarlet Macaw reintroduction program and the largest captive Great Green Macaw population in the world.

“I was very impressed to see such a vibrant community of over 100 pairs of Central American Scarlets and a remarkable group of Great Green Macaws. Clearly, they are breeding, as I saw dozens of young birds with black eyes,” said Mark Hagen.

“The centre has large 40 to 50 foot aviaries for pair bonding. It added some nesting areas in the colony aviary which produced a few babies a couple of seasons ago and now we are seeing pairs in large colony aviaries I never thought could be possible for macaw species,” he added.

Reintroducing macaws into the wild takes time and requires a huge effort by a large team of unsung heroes. Most are volunteers who are motivated by altruism and a sense of purpose for a good cause. They get no wages (only free board and food) and live in very simple living conditions.

People like Chris Castles, Co-director of the ARA Project. He and his team are usually up at 5 am to feed the birds, and their work days often end at midnight.

“In the last ten years, the sanctuary has released 130 macaws, 80 of which have survived in the wild. They recently released 10 Great Green Macaws for the first time ever,” said Mark.

“The centre has three release sites in Costa Rica. Some of the released birds include hand-raised ones, who stay nearby and rely on supplemental feeding stations where they have access to a mix of locally grown palm nuts, fruits and beans with added vitamins, prepared by Chris and his dedicated team.”

“Amazingly, the hand-raised captive bred macaws are now breeding in the wild, which is a world first,” he noted.

The centre requires a lot of food and vitamins to ensure that the macaws grow healthy and strong. Staff at the sanctuary spend a major part of their time preparing bowls of fruits and veggies soaked with vitamins and seed oil.

“The diet works, as the macaws looked amazing,” said Mark. The sanctuary relies on donations from companies such as Hagen.

“Two years ago, Hagen sent the ARA Project a pallet of Tropimix, Prime, and Clay-Cal for their macaw breeding program. Hagen has supported the ARA Project via World Parrot Trust Canada,” he said. 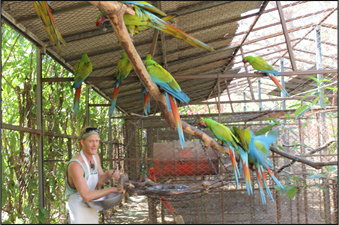 “Chris was happy to receive the donation because he did not have to feed the macaws all the usual fruits and veggies, since our food and supplements provided the required nutrition.”

"Prime is the best vitamin in the world. Please send me more. I love Clay Cal too," wrote Chris Castles in a recent email to Mark Hagen.

The ARA Project is now being forced to relocate as the land it sits on was sold to real estate developers by the founders’ children. A new piece of land was donated to set up a new sanctuary, but Castles estimates that they will need $200,000 to build it.

Click here to read more about the ARA Project and its relocation plans.

Castles says that if efforts to save the Great Green Macaw do not continue, the species will become extinct in 20 years. He believes that breeding, then releasing them into the wild can save them. It takes the right people, proper location and protocol. 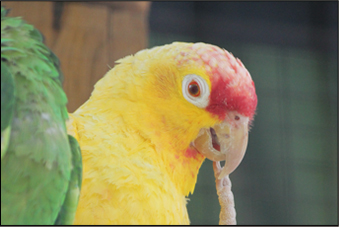 Finally, Mark travelled to the western coast of Costa Rica, where efforts to save endangered macaws are also ongoing at a wildlife conservation sanctuary called El Manantial, located in Aranjuez de Puntarenas.

El Manantial works with some of the most endangered native birds of Costa Rica, focusing on the rarest species and the most fragile habitats, such as Great Green Macaws and Scarlet Macaws.

“At El Manantial, I got an incredible feeling of nature as I stood watching about 40 Scarlet Macaws flying around freely,” said Mark

“The centre provides supplementary feeding stations to wild macaws. It has had a positive effect on the local Scarlet population, which remains close to the feeding stations, creating a higher density of pairs in the immediate area than you would normally find in the forest.”

“Reports from local people indicate that Scarlet Macaws have come back into the area.”

“The main source of revenue here comes from tourists who come in on buses from cruise ships. But there is always a need for donations, and we were happy to make one to help support El Manantial’s excellent work.”

“With your generous contribution, we have begun constructing a new enclosure that is 10 times bigger than the original one. It will provide a more suitable and comfortable habitat for a colony of little parakeets (aratinga canicularis),” said Rodolfo Orozco Vega, Director of El Manantial.

“All in all, I was inspired by what I saw and felt optimistic that the Great Green Macaw, as well as the Scarlet Macaw, will both soar again in large numbers in the Costa Rican sky.”

"Our Hagen Family donations both in parrot food and money to conservation projects such as these here in Costa Rica are a very meaningful part of my life,” concluded Mark.

Connect with HARI on:

Back to HARI home page.